Most of the Cat Caliban books focus on an issue, and the focal issue in Four Elements of Murder, first published in 1995, is toxic waste incineration. This book is based on an actual case, with names changed and the setting shifted about eight miles south and across the Kentucky-Tennessee state line. From the late 1960s, LWD (Liquid Waste Disposal) had operated a toxic waste incinerator in Calvert City. This area was a popular tourist area that had also attracted a heavy concentration of chemical manufacturers, including paint manufacturers, although more than 70% of the waste received at LWD was from out of state. By the early nineties, LWD had been operating the incinerator for ten years on a temporary permit, but the state’s efforts to revoke that permit in court had been unsuccessful. By 1997, cancer researcher Dr. Samuel Epstein of the University of Illinois’s School for Environmental Medicine had labeled Calvert City and communities downwind a “hot spot,” and the high rate of two rare forms of cancer strongly indicated an environmental source. The high incidence of cancer and lupus weren’t news to local residents, though.

When I researched the book in 1993-94, I read chilling stories of suspected LWD retaliation against whistleblowers — houses burned down and pets or livestock slaughtered. But the most chilling of all was the story of Lynn “Bear” Hill, who contacted a local journalist about more than 5,000 drums of extremely toxic chemicals he had participated in burying beneath a concrete slab at LWD. The journalist contacted the governor’s representative in the area to confirm the story; he did not name his source. But Lynn Hill was found dead in his truck a few days later. The death was ruled a suicide, but Hill was severely battered. The death Cat Caliban is called to investigate is based on this incident.

I have mixed feelings in reporting that the EPA declared the 32-acre site a Superfund Site in 2001, and that LWD closed and filed for bankruptcy in 2003. In 2013, the EPA settled with more than 130 former users of the site to recover more than $4 million, or about 86% of the cost of the cleanup.

I have never before or since felt endangered while conducting research for a book. But I’ll admit that after the stories I’d read, I was frightened when I drove to Calvert City to see and photograph the site. I felt a tremendous respect for the courage of local residents who were fighting for their lives and for their children’s lives and sympathy for those who weren’t. Either way, their children were endangered. 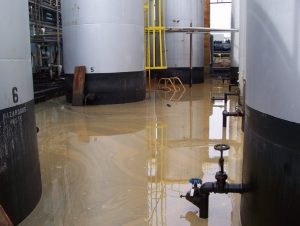 Does Cincinnati's abandoned subway really exist?
If You Want Something Done Right . . .