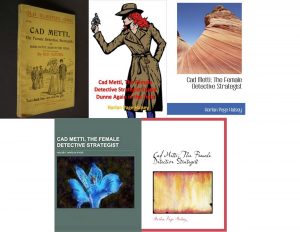 Here’s a girl detective that has outlasted Nancy Drew, even if she’s never had Nancy’s star power. I counted nine editions on AbeBooks alone (not including the edition I own) and you can read about her exploits online for free. The original edition, as far as I can tell, is Cad Metti, The Female Detective Strategist; or, Dudie Dunne Again in the Field, published in 1895 in the dime novel series Old Sleuth’s Own (no. 37). The author is identified as Old Sleuth, “Author of all the Famous ‘Old Sleuth’ Stories.” “Old Sleuth” was a pen name adopted by Harlan Page Halsey. But “Old Sleuth” was, like the “Carolyn Keene” of the Nancy Drew books, a pen name used by other authors within the Old Sleuth dime novel empire, as well as the name of the fictional protagonist of many of the stories. (In his 1982 book, The Dime Novel Detective, Gary Hoppenstand identifies this character as “the first serialized detective character” and the prototype for what he calls the “Avenger Detective.”) There are several female detectives attributed to Old Sleuth; in fact, Roberts, Hoppenstand, and Browne have published a collection entitled Old Sleuth’s Freaky Female Detectives (1990). That this collection does not include Cad Metti suggests how many examples they had to choose from.

Oscar “Dudie” Dunne had been introduced in a previous novel (no. 29 in the series) as an ace detective with a remarkable facility for disguise. In Cad Metti, he has acquired a female trainee, “one of the brightest women that ever entered the profession: she is a born detective.” We are not told Cad’s age, only that Dudie is young and in the opening scene, they are described as “a young lady and gentleman,” though they are in disguise. Dudie describes himself as “her instructor.”

Gender-bending, as we’d term it now, is clearly part of the sensational appeal of the story. Dudie himself is “a young man of singularly effeminate appearance, with muscles like whipcord and powers of endurance that were seemingly tireless. He was not only a great athlete but a wonderful boxer, and it was a favorite role with him to assume the character of a dude.” As for Cad, according to Dudie,

She could make her living on the stage as a marvel. She is a great musical genius. She can sing or dance, she can fence or wrestle like a man. Her strength is extraordinary, and as a pistol shot she is the champion woman of the world; and when it comes to quickness, nerve, cunning, and courage she cannot be excelled.

Indeed, the impersonation they’re enacting in the opening scene is intended to draw the attention of ruffians and provoke an attack — a common strategy for the two detectives. As Cad says, “it is a great thing to meet an antagonist who really underrates you.” Once the two are accosted by the criminals they are trawling for, a rare editorial comment assures the reader that the two are playing a dangerous game: “We desire to call our readers’ attention to the courage and nerve of both the detectives in daring for one moment to think of meeting those three great burly men.” When the attack comes, the two detectives draw their concealed billy clubs and counterattack: “Cad meantime played a single-note tattoo on the head of number two.” When the dust settles, one of the ruffians laments, “It was the gal gave me my rap and she came down on me with the force of a Goliah.” Yet Cad has a softer side, for we’re told that she’s a mother, since she has “rescued and adopted two Italian children from the street.” She joins the ranks of female detectives with adopted children apparently intended to reassure readers of their femininity; we never hear about the children again.

As the senior detective (and the one presumed to have established fans among the Old Sleuth readership), Dudie Dunne is the star of the narrative and the story follows his actions and thoughts. But this strategy heightens the mystery of his female partner, who often turns up unexpectedly, especially when Dudie is in trouble. And Dudie is often in trouble as the two track a large gang of counterfeiters, since several government detectives on the gang’s trail have already disappeared or been assassinated. It is Cad whose spying saves Dudie when he is taken in by a beautiful woman’s appeal for help. In the guise of a messenger boy, Cad has overheard the woman scheming with the head of the gang to lure him to his death, and Dudie, who in spite of being warned that the gang has female members, has declared, “I’ll bet my life on her sincerity,” is forced to eat his words. In another scene, when Dudie is being menaced by members of the gang and forced into a duel, a “boyish-looking youth” magically appears to serve as his second. This is Cad, of course, and she’s had the foresight to recruit three men who “were Jim terrors right on their looks” to back her.

The narrator emphasizes that Cad’s chief advantage as a detective is her skill at disguise and her consequent ability to spy on criminals. At one point, she is described as “the strange, weird girl, who could flit from place to place like a shadow, who could change her appearances as readily as a change actress on the stage.” At one point, even Dudie doesn’t recognize her in disguise as a messenger boy, and praises her as “the wonder of the age.” Historians of gender will note that while the story reinforces the particular reprehensiveness of female deceit, it is Cad’s ability to out-deceive the master criminal deceiver that makes her its hero.

There is no strong suggestion of romance between the partners, who call each other “brother” and “sis.” But when Cad dismisses Dudie’s “lovely lady” as “the beautiful siren who is to lure Ulysses into the den where he is to be slain with merciless precision and cold-blooded exactness,” he suspects her motives:

Seeing the glitter in Cad’s eyes he fell to a conclusion and asked:

“Is my beautiful partner jealous?”

Cad responds, “Yes, I am jealous for your life.” Whether the author intended to prepare the way for future romance, or whether he intended only to provide further evidence of Dudie’s inability to read women, I can’t say, since as far as I know, the pair never appeared together again. (I’m happy to be corrected by a more knowledgeable reader.)

Oddly enough, Cad exits the story before its climax. When Dudie’s villainous female antagonist gives the order to shoot him and the police burst into the room, Cad is nowhere to be seen — unless she is disguised as one of the men with repeating rifles who crowd the room. Has the author abandoned her when she’s served her purpose or is he guarding her secret? We can hope for the latter explanation, but the dime novels aren’t known for their subtlety. 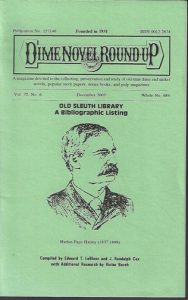 Cad Metti, the Female Detective Strategist is widely available in multiple additions. You can read it free online through Project Gutenberg or download a free copy at Kobo or Amazon.