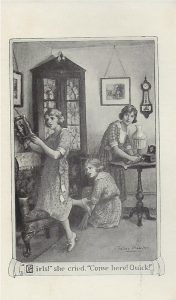 Suppose I asked you to name a girl detective in her teens, Titian-haired and beautiful, motherless but dearly loved by her lawyer father, a skillful driver who travels to places all over the map and solves mysteries with her chums. How many of you would answer “Patsy Carroll”?

Yet the first Patsy Carroll book, Patsy Carroll at Wilderness Lodge (1917), pre-dates Nancy Drew’s debut in The Secret of the Old Clock (1930) by thirteen years. The number of common elements in the Patsy Carroll and early Nancy Drew books (including a clock concealing a secret) strongly suggests that Edward Stratemeyer and Mildred Wirt (Benson) — the creative duo behind Nancy Drew — were familiar with these books. They are, in fact, an intriguing branch on the family tree of the girl detective because they illustrate the gradual emergence of the girl detective from the girls’ adventure series. In her classic account The Girl Sleuth (1975), Bobbie Ann Mason writes: “At the turn of the century (after decades of Little Prudy and Elsie Dinsmore and Pollyanna) there was an evident need in girls’ fiction for action, accomplishment, exhilaration . . . . There was a growing market for female adventurers, and eventually the girl detective emerged as the most ‘liberated’ and celebrated of heroines” (10). Under the pen name Grace Gordon, the prolific author Josephine Chase published four girls’ adventure books between 1917 and 1921 that foregrounded their heroine’s travels in their titles; in addition to Wilderness Lodge, these included Patsy Carroll Under Southern Skies (1918), Patsy Carroll in the Golden West (1920), and Patsy Carroll in Old New England (1921). All included a mystery and some detective work, to a greater or lesser degree.

Three of the books involve a search for missing documents, including the missing will in the first book that ties girls’ detective fiction to Gothic fiction. Two of the books feature false hauntings, as will the Nancy Drew mysteries later. Patsy and her friends are usually motivated to do their detective work by sympathy for a young woman in trouble. Yet despite references to Sherlock Holmes — to whom Patsy twice facetiously compares her Aunt Martha in Wilderness Lodge — and Edgar Allan Poe, as well as Patsy’s own declaration, “I have always fancied I would make a good detective” (Old New England 88), the girls do not make particularly good detectives. Like their predecessors in the dime novels, they often chance to be in a position to overhear conversations that give them useful information, but these occasions are the result of happenstance, not intent. And while their investigations have them searching high and low for crucial documents, in the end these documents are always discovered by chance. Patsy borrows a backpack in Wilderness Lodge and finds inside it the will they’ve scoured the house for. Her friend Mabel spends hours trying to locate a secret drawer in an antique desk in Southern Skies, but her friend Bee finds a secret drawer by accident when she bumps an antique table. And although Patsy and Bee have tried and failed to account for the haunting of an old house in New England, a puppy uncovers the mechanism responsible when he chases a feather under an old clock. Also behind the clock is an important codicil to the deceased owner’s will. Only once does Patsy find something because she went looking for it. In Golden West, Patsy’s determination to find a child presumed dead results in success when she finds the little girl in a nearby Indian village. That no one else faced with a missing, presumed dead, child and no body thought to go looking for her strains credulity, though.

That these books are firmly rooted in the girls’ adventure genre is evident in their disparate settings, which represent travels north, south, east, and west from the girls’ home in a town in New York. The girls call themselves “The Wayfarers.” The books feature extensive accounts of history and descriptions of scenery; in fact, these dominate long stretches of New England. These, too, will be echoed in Nancy Drew’s travels to exotic places. That sixteen-year-old Patsy should be the long-distance driver on at least one of these trips (Wilderness Lodge) shows her to be a pioneer that Nancy will follow in her blue roadster. In Golden West, her driving skills are called upon to extract a car from a precarious position after an accident.

However, the geographical scope of the Patsy Carroll books also provides ample scope for racism and cultural bias, as well as classism. Southern Skies is populated by untrustworthy, hostile Hispanics and credulous Black maids, as well as other benign “darkies.” The maid in Golden West is a “darling . . . little Chinese girl” (122) to whom Patsy talks baby talk. There are bad “Injuns” (232), Apaches, and good Indians, Hopis. In this, too, the books prepare the way for the Nancy Drew mysteries, in which villains tend to be swarthy, if male, and if female, gypsy. The poor orphan girl who engages their sympathies in Southern Skies, whom the girls style a “wood nymph,” is identified as Spanish, not Mexican, and is, says Bee, “as white as Patsy or I.” When Aunt Martha reacts favorably to this waif, Patsy declares, “Auntie isn’t the least tiny bit snobbish,” a statement so patently untrue throughout the series as to call attention to its source.

And here I feel compelled to add ageism and sexism to the books’ sins. Aunt Martha, the maiden aunt who will be replaced by housekeeper Hannah Gruen in the Nancy Drew books, has been caring for Patsy since she was a baby. She constitutes an important object lesson in the inconvenience of mothers and maternal figures to girl adventurers. She is most often characterized by her disapproval or outright banning of any venture she considers risky, which extends to most ventures, and her suspicion of anyone not of her race and class. She’s described in Golden West as “an energetic, elderly lady” (9). You may be surprised, then, to learn that Patsy’s father is her older brother. She is the target of much solicitude on the part of Patsy and her fellow Wayfarers, who often express the hope that their travels will provide her with an opportunity for rest. Perhaps the greatest mystery in the Patsy Carroll series involves precisely what it is that Aunt Martha needs rest from. On two occasions in the books, the group is left without a cook — a crisis of no little proportion. In Southern Skies, Aunt Martha heroically undertakes to produce a dinner. Little wonder that she’ll be retired long before Nancy arrives on the scene.

You can read these books online for free here:

Here’s a reminder of the generations of girl readers who devoured mysteries featuring girl detectives: the inside cover of my copy of Patsy Carroll in Old New England. 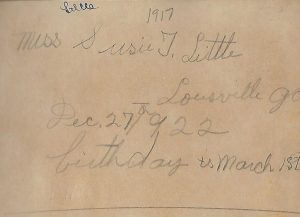