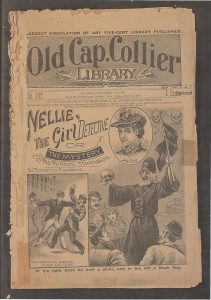 I’m including here Detective Edenhope’s 1894 dime novel Nellie, the Girl Detective not because it is a thrilling read, but because it includes so many of the tropes and themes prevalent in early girl detective stories. Despite the sensationalism of its content, the prose is plodding and the dialogue advances the story by baby steps, reminding readers, as do the one- and two-sentence paragraphs, that dime novels were uniform in length, so an author with a 20-page idea who wanted to sell a story to Old Cap. Collier Library had to find a way to stretch it to 30 pages.  I read it so you wouldn’t have to.

Nellie Nugent is an 18-year-old beauty who works for the Norton, Larkins & Co. detective agency. She’s smart, dedicated, and courageous. She’s also a crack shot. We learn that she’s powerfully motivated by a desire to advance in her profession. But if she’s given an unladylike ambition, she’s also given an acceptably feminine motive for her interest in money: “She was very poor, and had to depend upon her weekly salary and perquisites to support an aged and helpless mother, and educate a younger sister and brother” (24). Time and again, she risks her life for the potential reward: “If she should distinguish herself in the present case by recovering the missing Miss Mason, and bringing the culprits to justice, she would earn fame and riches” (24). Later, when she expresses regret that she cheated her boss of the criminal capture, we can be excused, I think, for skepticism.

Nellie is sent undercover to the Mason Mansion as a servant to investigate the disappearance of the Mason daughter on the night of her eighteenth birthday. Nellie discovers, with the help of her lock-picking skills and a hairpin, a network of secret passageways under the house that lead to a gothic cavern. This is the hideout of the Nighters, a cultlike criminal gang of men and women dedicated to evil. In this dimly lit place, surrounded by skeletons and skulls, the satanic master criminal Sam Sloat holds religious meetings of a sort, wearing a robe decorated with a skull and crossbones, waving a skull in his hand, and ranting about his evil power. One of the gang’s activities is white slavery, as a captured Nighter confesses: “It has always been the object of our gang to capture young girls and either to keep them until a large reward was offered for them, or take them to some other large city and dispose of them to some woman or man for a few hundred dollars” (20). Edenhope emphasizes the vulnerability of women to sexual exploitation, imprisonment, and male violence in large part for titillation, but also to highlight Nellie’s courage as she braves danger in the pursuit of her mission:

“It is a serious undertaking, but as I alone have discovered the secret entrance, I alone will see it to the end, come what will!

“What have I to fear any more than anybody else? I am prepared to fight. I am armed, and I know how to use the revolver as well as most men.

“Although I am only a young girl I am not afraid of the best man or woman that ever lived!

As it turns out, there are two missing girls being sought, both of them drugged and moved about as they are rescued and recaptured, demonstrating how little control they have over their lives and their bodies. Indeed, it seems that as the climax approaches and the danger increases, so do the reminders of Nellie’s youth and vulnerability; she’s called a “little heroine” (24) and a “brave little girl” (24). As she confronts the ghoulish spectacle of the cave for the first time, she experiences a moment of weakness, but it passes: “Her will-power was remarkable, and her sense of duty more so” (12).

This little girl manages to rack up a lot of rescues and captures: she rescues three men and two women and captures three criminals single-handedly, with the help of her daring and artillery: “The men turned round surprised and frightened, and saw a young girl standing in the doorway having them fully covered by two revolvers, one in each hand!” (19).

Interestingly, however, Edenhope avoids the easy explanation of feminine intuition that other writers use to explain their detectives’ thought processes. Nellie has instincts, but they are professional, not sex-based. When she tells her boss that she followed two men because of an “instinctive feeling” common to detectives, he agrees: “You are right there, Nellie; all great detectives will tell you the same” (22).

If you have been reading this blog, you might suspect by now that Nellie would be adept at cross-dressing, and you would be right. On two occasions she disguises herself as a boy, and Edenhope assures us that she makes a good job of it: “indeed, there are very few boys in the world who could have looked half so manly and bright” (24).

He also avoids the easy outcome of marrying Nellie off. There is a marriage in the end, but it is not Nellie’s. She receives gifts and property, but, the contemporary reader will be pleased to note, no wedding ring.

Thanks to the University of Minnesota for digitizing their collection of dime novels and for their help in accessing them. If in spite of everything I’ve said to discourage you, you’d like to read this novel, click here.

Santa Fe Sal, the Slasher; or, A Son's Vengeance
Laura Keen, the Queen of Detectives