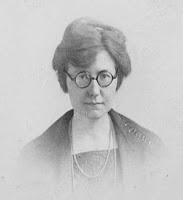 A queer fish indeed is Mercedes Quero, who shows up when she’s least expected and most wanted. She appeared in four novels by Gladys Edson Locke, who wrote as G. E. Locke: That Affair at Portstead Manor (1914), The Red Cavalier, or, The Twin Turrets Mystery (1922), The Scarlet Macaw (1923), and The House on the Downs (1925). Though Locke lived all her life in the Boston area, these novels are all British country house mysteries. They usually feature an unmarried male focal character, whom Bob Schneider of SpeedyMysteries.com compares to Captain Hastings of the Hercule Poirot mysteries.

Quero is a detective of considerable reputation, in spite of her gender. When a diamond necklace is stolen in Portstead Manor, a character says, “I should send for that woman detective, Mercedes Quero. All London is talking about her since the Dexter case,” to which Lord Portstead responds, “Women are not at all suited to detective work. They are illogical and carried away by sentiment.” In Red Cavalier, a character notes that she is “highly successful in her profession.” In The Scarlet Macaw, she’s described as “the celebrated woman detective whose fame was known throughout England and even on the Continent.” Of course, her nemesis Detective Burton has a different view of her, and calls her “the most devilish, provoking and meddlesome skirt that ever was wished on a man.”

We’re never told Quero’s age, only that she is young. But her background is typical for professional women detectives; in Portstead Manor, the male character who befriends her learns something of her history: “Born and bred a gentlewoman, a sudden turn of fortune had thrown her upon her own resources.” She is often described as attractive, as from the point of view of another male character in Red Cavalier: “This slim, girlishly pretty young woman with mirthful brown eyes, skin fair as a child’s and soft brown hair simply coiled in her neck was not at all his idea of the detective who had already won an enviable name in her chosen profession.” In fact, Quero’s eyes are frequently characterized as “mirthful” or “mischievous” or “mocking,” and they appear to express most particularly her opinion of the men who surround her. She is capable of gentleness toward vulnerable women, and her mirthful eyes turn “misty” with sentimentality as she watches one man’s gentleness with a crippled little girl. But these are rare moments. She does not suffer fools gladly, especially men, or challenges to her authority, telling one man, “Don’t be stupid!” and admonishing Detective Burton at one point, “You will be good enough to remember that I am conducting this inquiry.”

As for the qualities that ensure her success as a detective, she is called “devilish smart.” And when one male character, who has commented on “the paradox of a pretty woman and a logical combined,” calls her “jolly clever,” she responds, “It is my business to be ‘jolly clever.’” A woman character made rather uncomfortable by Quero’s “very unusual pursuit” calls her “quick and intuitive,” as if to reclaim her for the female gender by privileging intuition over logic. And there is something to this claim, since she has a habit of showing up on the scene under an assumed name, and sometimes, as in Red Cavalier, even before she has been sent for. In this case, like Sherlock Holmes, she has read about the case and taken an interest. In all of these cases, Quero first appears in the guise of a secretary or maid, so that the experienced reader begins to look for her in the background long before she takes center stage. These impersonations permit her to spy on the principals in the case, a most unladylike thing to do.

While she is not the most athletic of girl detectives, she is perfectly capable of subduing an angry woman wielding a knife (Scarlet Macaw) and carries a small revolver that she uses to shoot a fleeing suspect (Red Cavalier).

Only in the first book, Portstead Manor, are we given a glimpse of the drawbacks of Quero’s career. When one character tells her, “I cannot understand you,” she replies, “No one does. I am a very much misunderstood person.” At the end of the book, the narrator mentions her lonely life, and speculates on the value of her continued friendship with the focal male character, for which she was “probably grateful.”

Locke herself seems to have been an interesting figure, with multiple degrees from Boston University and Simmons College, as reported by Douglas A. Anderson in his blog on Lesser-Known Writers. She was sufficiently proficient in Latin, French, and Italian to tutor in these languages and taught high school Latin and English. She was a member of the Boston Society for Psychical Research and never married.

The books have garnered mixed reviews. Anderson cites a review by the New York Times of Mr. Locke’s The Scarlet Macaw that damns it with faint praise, calling it an “interesting mystery” delivered in “extremely mediocre prose.” The plots are intricate and convoluted, and in the last book, The House on the Downs, almost every character is using an assumed name (the names themselves are worth mentioning: Sir Quenton Rotherdene, Theophilus Elphic, Bannard Darrel, Wallington Melrose, Paul Wardle). Should you decide to go looking for the Quero books, be warned: they have recently been reprinted in dreadful editions by the Hard Press of Miami. These appear to have been scanned and published uncorrected, with Quero’s name spelled in a variety of ways, most frequently as “Queer.”

Cad Metti: The Female Detective Strategist
If You Want Something Done Right . . .