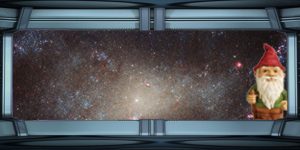 This is Elvis, coming to y’all live from way, way outta space.

Some of y’all have asked what the name of our spacecraft is. Like, do we call it something like the Enterprise or the Millennial Fountain? No, we just call it the ship. It has a symbol to identify it, which now that I think about it looks kind of like a Slinky walking down a really steep mountain. So maybe we should call our ship the Himalayan Slinky. I think it’s funny that you guys name your boats and planes, but Larry says you probably think it’s funny that a cyborg could be named Elvis. As you know, I took that name myself to honor the King. I have other names on other planets, but I think Elvis is my favorite!

Anyway, I read that y’all had taken a picture of a Black Hole. It’s a really cool pic! The best part of the story for me was the part about how scientists from different parts of the planet worked together. That part cheered Larry up because he doesn’t think Earth people get along very well, which is seriously bad news for the future of your planet.

So we wanted to congratulate you, but also to warn you. Since we left, y’all have started taking pictures of everything with your phones. (This is great for me because I miss Big Macs and Krispy Kreme do-nuts and cheese doodles, so I like to look at pictures of them, but to tell you the truth, Larry and I don’t understand why Earth people would want to take pictures of what they’re eating to show to everybody. We understand the utube films of kittens falling off furniture and dogs singing, and we like those a lot—but you know how I feel about DOGS! ) And I’ve read some stories about people who fell off a cliff because they got too close to the edge for a picture. Sooner or later, somebody on Earth is going to get an idea about posing for a selfie in front of a Black Hole. DON’T DO IT! This would be a REALLY BAD IDEA!!!! Black Holes are really, really dangerous and if you go anywhere near one, it will SUCK YOU IN! And it’s not like an Earth cave where somebody can go down there after you and rescue you. So take it from me, you should not go anywhere near a Black Hole.

That’s all for now.