One of the scenes in One for the Money, the first book in the Cat Caliban series, is set in an abandoned subway tunnel. In the late 19th century, Cincinnati was among the top ten most populous American cities, comparable to Chicago and New York in economic importance, and it suffered from the problems that growth created. In 1888, the advent of the streetcar marked the city’s first major attempt to confront the issue of mass transit. Meanwhile, dividing downtown from the city’s northern neighborhoods and suburbs was the Miami and Erie Canal, once a critical waterway connecting the Great Lakes with the Mississippi River but abandoned by the late 1870s. In 1916, a plan was developed to drain the canal and use the canal bed to build a subway that would form a 16-mile loop through the city and its suburbs. A bond issue allocated $6 million to the project, but construction was delayed until after World War I. By the time construction began in 1920, postwar inflation had doubled the cost of the project. Six stations and a little over two miles of tunnels were constructed.

Then came a shift in the political wind. The political machine that had long run the city government was successfully challenged in 1926 by a new reform party, the Charter Party, which was committed to ending the subway project. The bond money ran out in 1927, with only seven miles of tunnels completed. The arrival of the Great Depression in 1929 sealed the subway’s fate. While there have been periodic attempts to revive the project, they have all failed. Even the 1960s boom in subway construction in cities like San Francisco and Washington, D.C., passed Cincinnati by. The bonds were paid off in 1966 at a total cost of more than $13 million.

Alternative proposals for the tunnels have likewise been doomed to failure. A local winery’s bid to store wine and create a bottling plant there fell through over the issue of permits. A 1970s scheme promoted by local television celebrity Nick Clooney (brother of Rosemary and father of George) to build an underground mall and night club there faltered over insurance problems. In the 1980s the city’s pitch to filmmakers needing underground sets (think Batman Forever) fell on deaf ears. And a recent proposal  to construct a light-rail system there failed two-to-one with Cincinnati voters. However, if you find yourself in Cincinnati in a post-pandemic future, you

can book a tour of Cincinnati’s famous white elephant. 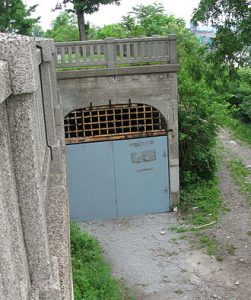 How did the Manned Spacecraft Center end up in Houston?
Was FOUR ELEMENTS OF MURDER based on a real case?