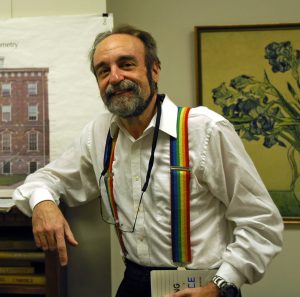 On Parallel Universes and Other Cosmic Weirdness

It all began with a cat.  Well, no. Not really. I’m not sure whether the cat exists or not, and therein lies the possibility of parallel universes, or parallel dimensions as this and many other science-fiction novels refer to them.

In fact, it all begins with quantum uncertainty.

I can love these ideas and scoff at them at the same time. Such is the joy of the true astronerd. Before we get things going, let me scoff a little. If such parallel dimensions exist, they are almost certainly beyond our ability to detect and verify. Science depends on such verification. It experiments. It measures. It quantifies. Therefore, on a practical level, I concern myself with matters I can substantiate or disprove. As an old teacher said to me once, “Just because the laws of nature allow something to happen doesn’t mean that it did happen.” However, it’s fun to speculate about the weirder aspects of the universe, so here goes.

Physics can be divided into two types: classical physics and quantum mechanics. Classical physics explains most physical interactions, like why a ball bounces when it drops and why it dropped in the first place—in short, gravity. It can also be used to predict physical interactions, like what will happen when you drop a ball. All of those things happen on the level of the very large, in other words, the world of human experience, on a daily basis.

However, there are some physical interactions that it does not explain; for instance, how light can be turned into electricity and what that mysterious term “gravity” actually means.

Bringing the two sets of explanations together has become the grand obsession of many people who study the two forms of physics, and with good reason.

The laws of classical physics can be tested and quantified. In that regard, Einstein’s relativistic theories simply explain what happens to the laws of physics at high velocities and masses.

On the level of the very small where quantum physics rule, that act of observation affects the result and makes accurate measurement quite difficult. That principle is known as quantum uncertainty.

As long as it remains unobserved, the first particle could pass on either side. Where it actually goes will determine its interaction with other particles. The process continues ad infinitum with an increasing number of interactions and possibilities.

If we try to observe the interaction of the two particles, we would have to send photons or some other particles streaming in its direction. We would thus influence the motion of the particles and, in effect, choose one of the possibilities. If we don’t observe it, then all the motions remain possible.

It’s as if we threw a bowling ball down an alley and the only way to detect its motion toward the pins was to throw another bowling ball at it and listen for the sound of the impact. Before we threw the second ball, all the possible paths of the bowling ball remained possible, in potential at least. Throwing the second ball both discovered its path and changed the path at the same time.

What makes sense on the mathematical level in quantum physics seems patently absurd on the level of the gross physical world where classical physics rules. The ball goes where it goes. It knocks down 10 pins or nine.

On the level of the large, where we live, speculations about all the possible motions of the bowling ball seems silly. We do our best to understand why the bowling ball goes where it goes. We factor in the quality of our bowling shoes. We practice throwing the ball. We examine our strides and our release. But we also understand that we cannot consider all the factors involved. We do our best, but then we let ‘er rip and expect that the result is the only one that can happen even if we don’t understand everything that’s going on.

Thus, on the level of the large, imagining all the potential paths of the bowling ball seems pretty useless at best. Imagining that they actually happen in some parallel universe seems to violate both the laws of physics and the rules of logic. But that’s exactly what quantum physicists do. In other words, when we project the behavior of subatomic particles on the larger material world, weirdness prevails.

And that’s where the cat comes in.

In 1952 Edwin Schrodinger attempted to explain the uncertainty problem, which is at the heart of the attempt to reconcile quantum and classical physics.

As long as the box stayed closed, you wouldn’t know whether this had happened or not, so according to quantum principles, the cat is both alive and dead at the same time. It’s only when you take a measurement, i.e., look in the box, that the uncertainty ends and the cat is either alive or dead.

In fact, Schrodinger was trying to show the absurdity of trying to project quantum uncertainty into the level of the gross material world. For all his obsession with thought experiments, he was a pragmatist who believed that the cat was either dead or it wasn’t.

But that didn’t stop highly qualified physicists from claiming that the cat is indeed both dead and alive.

Trace that set of possibilities back to the Big Bang that created our universe and the number of possibilities becomes, well, even more infinite, if you will excuse the expression.  Project all of those possibilities onto the immeasurable enormity of the universe in which we reside, and the mind boggles (if it hasn’t boggled already).

On the level of the large, did you hit the snooze button on your alarm this morning? If you did, the act generates at least two possibile realities, and those two suggest at least two more. Did you have orange juice for breakfast? Did you gulp it or sip it? Well, you get the idea. And all of those alternative sequences of events happen only in universes where you existed in the first place.  Because of the large number of interactions that happened before you arrived on the scene, the number of universes where you exist is a much smaller infinity than the infinity as a whole.

Now add to the picture all of the universes that might have come into being from big bangs other than our own. Proponents of such multiverses, as they are called, insist that the mathematics support their conclusions, and we’ll have to take their word for it because those multiple universes are probably separated from each other by an impenetrable firewall. They probably all operate under quite different physical laws.

All those possibilities might be all around us in separate but unequal equal spacetimes separated from each other by the different laws that rule them.

Or the parallel universes might be like membranes that exist in parallel like the many thin layers of an onion. In that case, perhaps the detection of them and travel between them is possible in ways that we cannot yet imagine except in the most imaginative sphere of all—science fiction.

Who know? I certainly don’t, and therein lives the joy of science fiction. The writers don’t understand it either, but they have the courage to speculate about some of those infinite possibilities.

Tom Burns is Director of Perkins Observatory in Delaware, Ohio, as well as a columnist and Part-Time Professor of English at Ohio Wesleyan University. 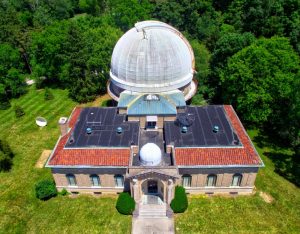 Why does time pass more slowly in space than on Earth?
How did the Manned Spacecraft Center end up in Houston?