Dizzy Lark and her chums in Bayou City Burning inherit a long and distinguished legacy from more than a century of girl detectives who came before them—a history that began long before Nancy Drew first drove her “new, dark-blue convertible” onto the scene in 1930. In this blog, I’ll tell you about some of these spunky young women. For the purposes of my research and this blog, a “girl detective” is a single young woman in her teens or early twenties.

This figure first appears in the dime novels of the late nineteenth century, where the frequent inclusion of gothic elements links her to the courageous and curious gothic heroines of the mid- to late eighteenth centuries. In fact, the first gothic novel, Horace Walpole’s The Castle of Otranto (1764), featured two such heroines, who defy corrupt paternal and royal authority and explore forbidden spaces in the service of justice and self-defense. The type of the timid, fainting gothic heroine so deliciously spoofed by Jane Austen in her youth (Love and Freindship [sic], 1790) was less common than might be generally supposed. It’s true that Emily St. Aubert faints dead away in Anne Radcliffe’s The Mysteries of Udolpho (1794), but she does so after defying the injunction against lifting the veil on an infamous veiled picture to see what lies beneath. When we consider that at the time, she’s been kidnapped and transported to a creepy moldering castle in a foreign country, we can applaud her determination and excuse a momentary weakness. And we shouldn’t be surprised that one of Anne Radcliffe’s early biographers, Clara Frances McIntyre, identified Radcliffe’s work as a forerunner of later detective fiction (Ann Radcliffe in Relation to Her Time, 1920).

In the second half of the nineteenth century, dime novels and story papers provided cheap thrills for the masses—and probably for many of their middle- and upper-class counterparts. Detective stories and westerns were two popular genres, and some stories crossed the boundaries between them. The need for publishers to fill these monthly papers and wrestle readers away from their competitors led writers to imagine a wide range of sleuths—the more sensational, the better—not just an Irish, Italian, French, or Yankee detective, say, but a “magic disguise” detective, a gypsy detective, a Wall Street detective, a ventriloquist detective, a “magic trick” detective, and a bicycle detective, to name a few. Lady detectives offered yet another oddity, and were presumably even more sensational if they, too, crossed categories, such as Italian or French or gypsy women detectives, the lady bicycle detective, and the lady barber detective (a western crossover).

I’m going to start here with one of my favorites from the dime novels, New York Nell. 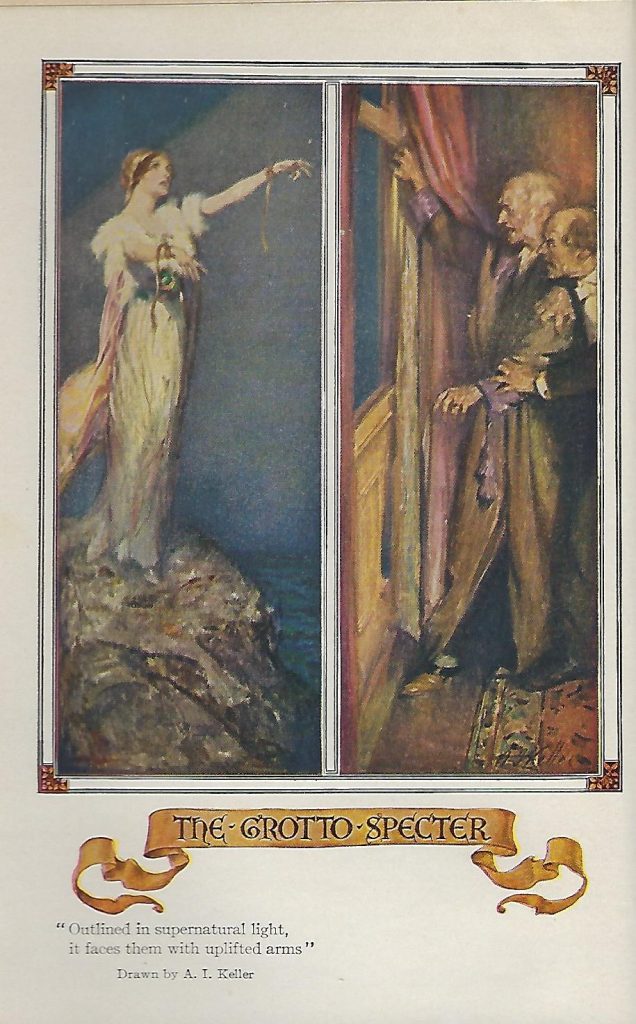 In her landmark 1979 book Murderess Ink, Dilys Winn identifies Anna Katharine Green as one of the “founding mothers” of detective fiction, and notes that up until the rediscovery of Seeley Regester’s The Dead Letter (1867), Green was credited with writing the first cozy detective novel, The Leavenworth Case (1878), which introduced many of the characters and plot devices with which we’re familiar today. In two subsequent novels featuring the same detective, Ebenezer Gryce, The Affair Next Door (1897) and Lost Man’s Lane (1898), Green introduced the first spinster detective, Amelia Butterworth, forerunner to Miss Marple, Maud Silver, and others. Then in 1915, Green created a girl detective, debutante Violet Strange, in The Golden Slipper and Other Problems for Violet Strange, a collection of linked stories.

Violet is strange in many ways, the most puzzling of which is her willingness to undertake detective work despite her social status and apparent wealth. The police chief who hires her is compelled to entice her to take a case by engaging her interest, and yet admits that “the consent he had thought dependent upon sympathetic interest could be reached more readily by the promise of a large emolument” (32). When her employer brings her a case that she regards as distasteful, she scolds him, “I should not be asked to touch the sordid or the bloody . . . . What do you see in me, or miss in me, that you should drag me into an atmosphere of low-down crime?” (68). On another occasion, she dictates that a case “must be an interesting one,” and further specifies, “It must not involve death or any kind of horror. If you have a case of subtlety without crime, one to engage my powers without depressing my spirits, I beg you to let me have it” (139). Once when Violet feigns indifference, the wily chief leaves behind an envelope of notes on a case, knowing that her curiosity will induce her to read them; as she dances and socializes that evening, her thoughts are not on her adoring partner, but on the hints that the chief has dropped regarding the case: “A woman difficult to understand! A mysterious house—possibly a mysterious crime!” (187). To add to the puzzle, Violet’s detective work must be kept secret, particularly from her father. We are never told how old she is, but presume that her debut was fairly recent.

Violet specializes in cases involving high society, in which as a debutante she can move freely without blowing her cover. In Problem 1, “The Golden Slipper,” for example, she attends a house party to safeguard a priceless jewel necklace, and then discovers the culprit when the necklace is stolen. In more than one case, in spite of her abhorrence of violence, she clears innocent suspects of murder. In Problem 4, “The Grotto Spectre,” she achieves this end by impersonating the ghost of the murdered woman (as illustrated in the frontispiece above).  As this detail suggests, the world in which she moves is a blend of sparkling modernity and Gothic gloom; in a missing will case, she describes the house in which she is staying: “had it been taken bodily from some historic abbey of the old world, it could not have expressed more fully, in structure and ornamentation, the Gothic idea at its best” (154).

Like other girl detectives, including Nancy Drew, Violet Strange is motherless, since it is difficult to pursue adventures with an affectionate and attentive mama hovering about. She has instead, like Nancy, a father, who, however loving toward her, turns out to be the source of Violet’s problems. We learn in Problem 9, “Violet’s Own,” that he has disinherited Violet’s sister, who married her music master and lives in poverty, now a widow. Since the sister is too proud to accept money from any other family member, Violet’s detective career will finance the sister’s further musical training, which will permit her to support herself. Violet explains, “The money I have earned has been immense; since it was the troubles of the rich I was given to settle, and I was almost always successful” (424).

Like Nancy, Violet is privileged in her ability to move about freely, although her chauffeured limousine is both more luxurious and more constraining than the various cars Nancy owns and drives herself. Unlike her predecessors in the dime novels, as a relatively sheltered young lady, Violet cannot travel alone to questionable places; she must take her brother into her confidence and ask him to accompany her on such occasions.

All of this information is presented in the final problem by way of a confession to the man she is about to marry. Yes, dear reader, Violet’s detecting days are over, and we may be disappointed in this conventionally feminine ending. She is not, however, marrying one of the society swains who surround her at balls and house parties and teas, but a rather melancholy man whom she has cleared of charges that he murdered his first wife. With that, I suppose we must rest content. After all, the liberated Twenties are still five years in the future.

To read the full text of The Golden Slipper, click here. 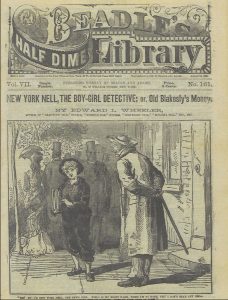 In New York Nell, The Boy-Girl Detective: or, Old Blakesly’s Money (1880), by Edward L. Wheeler, the title character Nell Niblo swaggers onto the scene in the character of a newsboy selling papers on a street car in Philadelphia. We see her through the eyes of Redmond Blakesly, a bit of a rube who can be excused for his surprise at beholding this cross-dressed urchin at a time when cross-dressing was illegal. He strikes up an acquaintance with her to learn her story. She tells him she’s from New York, but “had to skip out, because I p’izened a butcher’s big ugly dog, an’ the cops was going to put me in the Tombs.” (Later, she returns to New York, and we hear no more of the impending arrest there.) When Blakesly criticizes her attire, she tells him, “I like the togs first rate, because a person can get around ship-shape, much better.” Moreover she confides that the newspaper sales are a sideline that brings in some money and helps her in her real business: “I’m a detective.” She is 17, a year younger than Nancy Drew was in her debut novel.

Blakesly scoffs, but it turns out that he is in need of a detective, though he doesn’t know it yet. He’s about to be targeted by an old enemy in a swindle involving a false claimant to his considerable estate, a young man who pretends to be Blakesly’s long-lost son. In one of the coincidences endemic to these stories, Nell meets Blakesly’s true son while she’s rescuing a young woman from a burning boat (she identifies herself to the fire patrol as “Nell Niblo of the N.Y.D.F.”). She undertakes to expose the false claimant and protect the older Blakesly, whom she regards as well-meaning but naïve. During the course of the case, she has occasion to dress in women’s clothing, and draws admiring glances to her amusement, saying to herself, “Oh my! What a figger I cut! S’pect half of my old acquaints won’t know me.” But like other girl sleuths both before and after her, she finds male clothing gains her entrance into places, such as saloons, where she can pick up useful information. In fact, she acquires a number of wigs and costumes to permit her to move about freely. But perhaps more importantly, she is well armed; just when two paid killers are about to murder the true heir, Nell intervenes: “About a half-score of feet away, stood New York Nell, with a pair of cocked Smith and Wesson’s [sic] in her gripe, the muzzles of which were turned menacingly upon the would-be criminals.” When the chief villain tries to hire someone to remove Nell permanently, his prospective henchman declines, saying, “There isn’t a sport in N.Y. who does not know her by sight, or hearsay, and respect her.”

At the end of the story, Nell has her moment to confront the villain and summarize the case, telling him, “Your hand is beat. You are fogged. I’ve got your full pedigree and future mapped down in my log-book.” And when old Blakesly tearfully thanks her, and calls her “my brave, noble child,” she responds, “No, don’t call me your gal, fer I ain’t no one but Nell Niblo, who wears trowsers in spite o’  fashion or famine.” Sadly, while she is not married off, like many others of her ilk, to the hero of the story, she is married off, in the last sentence, to “a noble husband, who is justly proud of his wife whose experiences in the detective business brought about such auspicious results!”

Thanks to the wonderful Edward T. LeBlanc Memorial Dime Novel Bibliography, links to many of these rare works can be found in one centralized location. To read the full text of New York Nell, click here. You can read more about Edward Lytton Wheeler on Wikipedia.